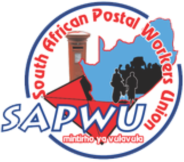 The idea of forming an alternative trade union in the Post Office came through informal discussions around early 2008. On the 8th August 2008 in Kwaggasrand (Pretoria) a decision was taken that we start a formal registration process of SAPAWU (South African Postal Workers Union) with the Department of Labour.

The draft emblem/logo was circulated to different regions for inputs. The view was that it should capture the essence of the post office worker. On the 18th December 2008, a formal application was made with the Department of Labour to acquire a Certificate of Registration, this being a requirement in terms of the Labour Relations Act, Act 66 of 1995. The Certificate of Registration was issued by the Department of Labour on the 27th May 2009, with Registration Number LR2/6/2/1672

The process of seeking recognition status in the post office started in earnest from April 2009, which culminated in the signing of the Settlement Agreement on 27 May 2010. The purpose of the settlement was to outline a process that was to culminate in the signing of the Collective/Recognition Agreement, which the post office backtracked at the 11th Hour. On 14 February 2011, we got an award aptly titled the “Valentine’s Award”, which was in favour of Sapwu which was giving us certain organizational rights ( Section 12.13 and 15). The post office then took the award under review at the Labour Court, the post office succeeded in setting it ( award ) aside.

The aims and objectives of SAPAWU (South African Postal Allied Workers Union) and other Post Office Unions are:

1. To regulate relations between members and their employers and to protect and further the interests in

2. To strive for economic and social justice for all workers by means of, regulating relations, negotiating, and settling disputes between workers and employers.

3. To oppose any discrimination in employment and fight for the rights of all workers in any facet of work.

4. To advance the democratic right of every worker.

5. To encourage the settlement of disputes by conciliatory methods.

1. To promote, support, or oppose, as may be deemed expedient, any existing or proposed legislation or other measure affecting the interests of members.

2. To use every legitimate means possible to convince all persons who are eligible for membership to become members.

3. To encourage and unite into a single organization all workers are employed in the industry in South Africa who are eligible to become members of the Union and or to enhance their economic and social welfare.

4. To protect the job security of members, to advance their employment prospects, and generally to do all things that will be in the interest of members in their individual and collective capabilities.

5. To improve the wages, salaries, and terms and conditions of employment of members through collective bargaining and other lawful means.

6. To provide when deemed necessary, legal assistance to members in connection with their employment and related matters.

7. To inculcate a spirit of unity and solidarity amongst all members and workers in the industry and educate members of the Union in the true spirit of family unity, oneness, and solidarity-based on the philosophy of individuality of the workers and their families.

8. To co-operate with the National and International Organization and thereby improve the general standard of living of the workers union

9. To perform other lawful acts as may appear to be in the interest of the Union and its members and oppose acts, which are not consistent with the objective of the union

10. To act, oppose, and negotiate in the matters concerning Unfair Labour Practice.

11. To operate in the name of the Union generally such that a role may be played in the social, economic and political upliftment of the community at large

12. To observe and act in accordance with the spirit and principle of democracy in all Union activities